Screenwest is pleased to support Nintila Aboriginal Film Festival this November, as it grows to become a centerpoint in Kalgoorlie’s important cultural events calendar.

The Nintila Aboriginal Film Festival is a 5-day film festival featuring films by Aboriginal directors or films of significance to Aboriginal history, language or culture hosted in Kalgoorlie.

Postponed through COVID-19, the festival has again aligned with NAIDOC Week celebrations running in November 2020. The community impact of this festival is incredibly strong, from engagement with screen culture and Indigenous culture to development and inspiration of emerging filmmakers.

With Screenwest’s support, the festival this year will be hosting an expanded skills and development workshop, facilitated by filmmaker Rodney Stratton and Mark Bin Bakar, the creator behind the beloved Mary G character.

The two-day session running on Monday, 9 and Tuesday, 10 November will focus on emerging filmmakers finding their story and directorial voice, empowering their creative and working through possible future pathways. The workshop is free and those interested are encouraged to contact Goldfields Aboriginal Language Centre.

“This is the first Aboriginal film festival to be held in the region and was born from the desire to showcase films produced, directed, filmed, or featuring Aboriginal people and Aboriginal language.

“Nintila is inspiring, uplifting and is encouraging locally made film production. GALCAC is thrilled to receive support from Screenwest and Lotterywest for the 2020 Nintila festival.”

Screenwest CEO Willie Rowe said, “The work that the Goldfields Aboriginal Language Centre does is so important in sharing Aboriginal screen culture. Screenwest is proud to support the festival and its empowering workshop to inspire filmmakers of the future.” 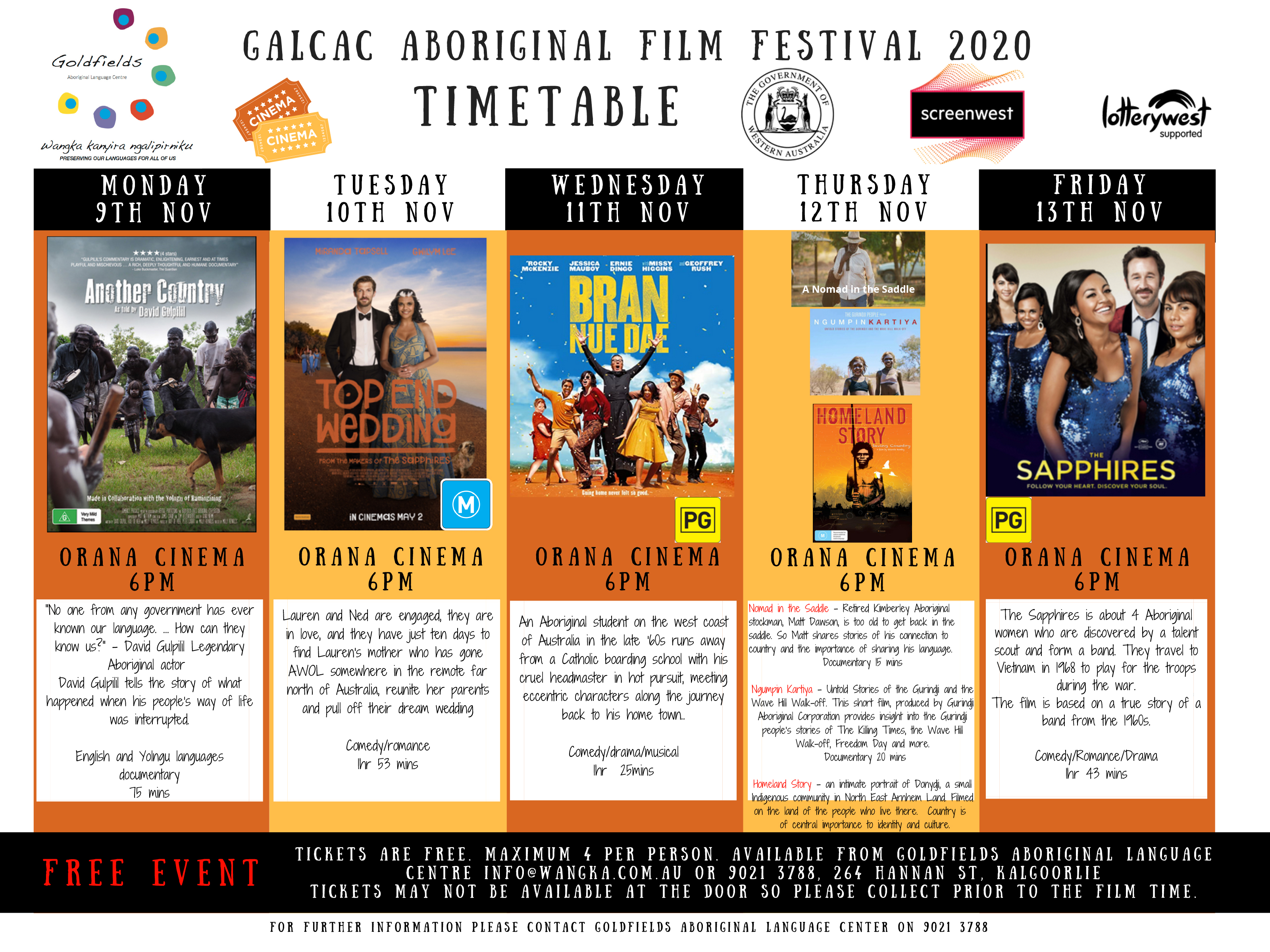 This festival program and filmmaking activities are made possible with support from Screenwest and Lotterywest through the Audience and Community Engagement Fund.

For more information on the Nintila Aboriginal Film Festival, their screening program and workshop please get in touch with the Goldfields Aboriginal Language Centre.

Rodney is a freelance film maker who has worked in film production for over 25 years with films broadcast on ABC, SBS and NITV.

Rodney has worked as director of photography and editor, at times on the same film, specialising in remote and Indigenous film production to a cinema grade.

Award winning films include Land of the Little Kings with Archie Roach, and Frankie’s Story for the ABC.

Meet the creator behind Mary G. Mark is a live performer, television presenter, writer, director, producer of film as well as a motivational and inspirational speaker.

Mark is a Kitja man who has been a major contributor to the Kimberley, Western Australia and Australia through the arts and media. He is a committed person and has a state and national profile through his character Mary G. He is a Kimberley person married to a Noongar woman.

Mark is a live performer and a television presenter and has won a number of awards over the years. He is also a writer, director, and producer of film and video. He has had three documentaries and two series of 6 episodes each on national television. He established and created the nationally acclaimed Stompen Ground Festival. He has events management skills along with public speaking and submission writing abilities.

The Audience and Community Engagement Fund aims to assist organisations to create and organise activities which enrich and elevate the Western Australian screen industry.

Screenwest is committed to supporting the promotion of Western Australian productions and practitioners to their local community through these activities which make a rich, cultural contribution to a vibrant WA.

Read about other Audience Community Engagement Fund supported activities on the Screenwest website.