After more than a decade as one of Australia’s musical theatre stars, WAAPA alumni Lucy Durack (WICKED, LEGALLY BLONDE, SISTERS, THE LETDOWN) is set to premiere her screenwriting debut LIFT, a bite-size romantic comedy set entirely in an elevator on 10Peach this Valentine’s Day.

When serial temp Olivia (Durack) steps into an elevator for her 46th job this century, she needs to make this one stick. Inside she meets strait-laced Simon (Duncan Ragg) preparing for a nerve-wracking rooftop marriage proposal.

Despite a disastrous first impression, confusing office politics, interfering colleagues (Mark Coles Smith and Vivienne Garrett) and Simon’s impending nuptials, these two might just fall in love, one elevator ride at a time.

“I am so excited to have LIFT, our screenwriting debut and mini rom com, screening for the first time on 10Peach, not to mention for it to happen on February 14!” said Durack. “Most excellent and unique Valentine’s Day present ever! Thank you, not-so-secret admirer, Network 10!”

“We can’t wait to have a screening party and celebrate our TV premiere. This is the first time a Mad Kids project has been broadcast on commercial TV, so we’re thrilled!” said Producer Lauren Elliott.

Following ten years as one of Western Australia’s top theatre directors, Director Zoe Pepper has kicked off 2019 with not one but two web series. THE BIG SPAGHETTI, which she directed and co-wrote with Adriane Daff and Tim Watts, made its North American premiere at Slamdance Film Festival in Utah last week and has already resulted in buzz from Hollywood.

“It’s amazing how much heart we managed to pack into a small wooden box,” said Director Zoe Pepper. “Working with Lucy, Lauren and the whole team was such a great experience. I’m so happy I get to premiere my first rom com on the most loved up day of the year.” 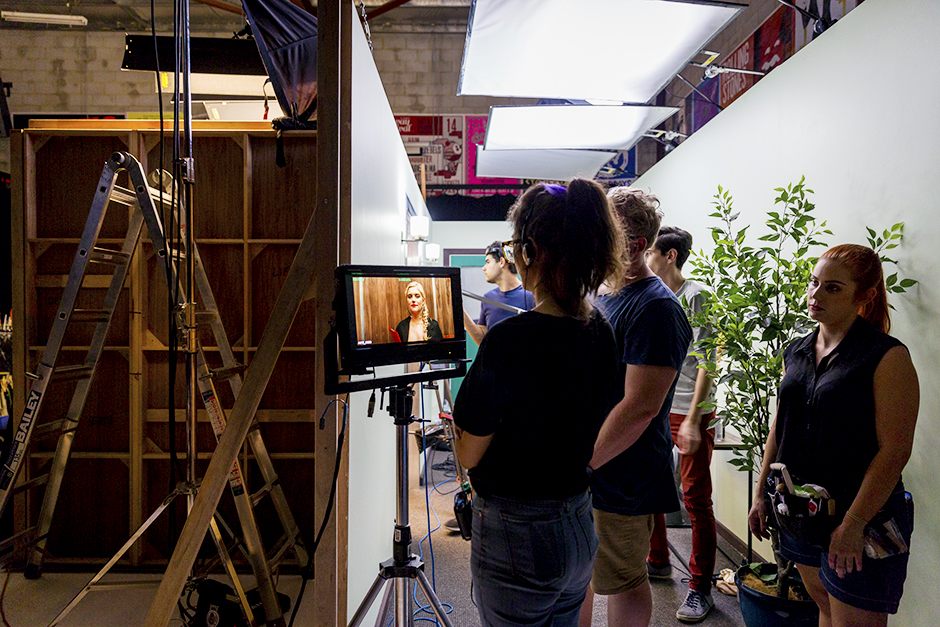 Behind the scenes in the purpose-built LIFT set inside Johnny Ma Studios in Maylands, Perth. Photo by Jessica Wyld Photography.

LIFT was funded by Screenwest’s Elevate Initiative and made its world premiere at CinéfestOZ Film Festival in Busselton in 2018. It was 1 of 6 projects selected by an expert industry panel from 14 writer/producer/director teams who were shortlisted from 57 applications. Screenwest’s Talent Development Manager, Eva Di Blasio, is excited to see the project lift the profile of WA’s emerging creatives.

“Director Zoe Pepper and Mad Kids are rising Western Australian stars who have continued to deliver compelling and engaging content through our funding programs. It’s no surprise to hear 10Peach has picked up this amazing web series,” said Di Blasio.

Mad Kids has produced a slate of original digital and television comedy projects including:

Watch Lucy Durack on The Project to find out more about filming LIFT and making her screenwriting debut.

LIFT will premiere on 10Peach, 10Play and YouTube on Valentine’s Day.

LIFT was produced with support from Screenwest and Lotterywest.