Amid the festivities, Screenwest CEO Seph McKenna, John Beaton, Celia Tait, Joan Peters and Director General Duncan Ord took to the stage to make some key announcements, including the recipients of the 2018 West Coast Visions Initiative and the Inaugural Brian Beaton Award. 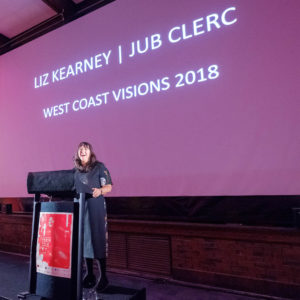 The recipients of the 2018 West Coast Visions Initiative are Producer Liz Kearney and Director Jub Clerc. They will receive $750,000 towards their feature film.

“Jub and I are extremely appreciative of the opportunity Screenwest has provided through West Coast Visions for us to make Jub’s first feature film,” Ms Kearney said post announcement.

“We can’t wait to bring a story inspired by Jub’s own life to the screen and are looking forward to showcasing the talents of the entire team involved.”

Check out the West Coast Visions page of the Screenwest website for more information about the initiative. 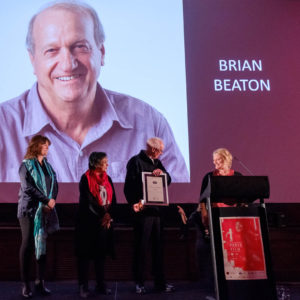 The inaugural recipient of the Brian Beaton Award is Dawn Jackson. Ms. Jackson will receive $10,000* towards her social impact project POINTE.

The Brian Beaton Award was launched earlier this year in recognition of the valuable contribution made to the screen industry in Western Australia by esteemed Producer Brian Beaton.

The Brian Beaton Award will be awarded annually to a filmmaker or filmmakers with a current social impact project that needs further support to reach its full potential.

Check out the Brian Beaton Award page on the Revelation Film Festival website for more information.

Relive the night and check out the Industry Celebration album on the Screenwest Facebook page now!

*Correction: in a previous communication we incorrectly stated this year’s Brian Beaton Award recipient would receive $12,250.