After a decade as one of Western Australia’s top documentary filmmakers, writer/director Alison’s debut foray into scripted filmmaking is a heartbreaking and visually stunning short film with no dialogue, which explores the real-life practice of camel culling using a tracking device in Australia.

JUDAS COLLAR is an incredibly ambitious film starring eight camels and filmed in a searing hot summer in remote desert locations in Western Australia, with a skeleton film crew and a team of camel wranglers who endured eight flat tyres, two bogged vehicles and a blown head gasket on the camel float.

Behind the scenes of JUDAS COLLAR. Photo by Jessica Wyld Photography © No Thing Productions.

The film took out the jury prize at the Awards Luncheon at AFF. 81 films that were selected for the AFF short narrative program from over 2700 short films submitted. The win means that JUDAS COLLAR now qualifies for entry into the 92nd Academy Awards in 2020.

“It was an incredible honour to win the Austin Film Festival,” writer and director, Alison James said.

“Brooke and I attended four days of intensive masterclasses with some of the best writers in the world before receiving the Best Short Narrative Film award so we are both leaving motivated and inspired.

“At the award ceremony I was speaking with Oscar-nominated writer Tony Gilroy (MICHAEL CLAYTON, THE BOURNE IDENTITY) and his advice to me was simple: “Don’t take a day off. Write tomorrow. Even better, write tonight.” I think this is excellent advice and I take it to heart.” 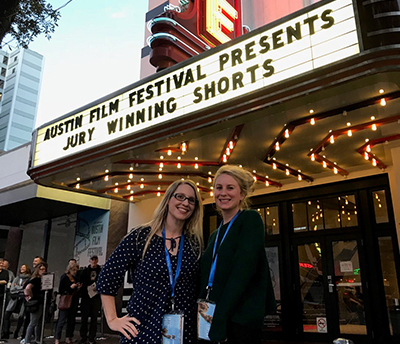 Alison also received a Special Mention for the ‘Rouben Mamoulian Award for Best Director’ at the 48th Sydney Film Festival Dendy Short Film Awards in July and was a 2018 AACTA finalist (Australian Academy of Cinema and TV Arts) for Best Short Film.

“It’s really great to see our WA practitioners being recognised on the world stage for their exceptional work,” said Screenwest Head of Production and Development Matthew Horrocks.

“I’m delighted to see our home-grown talent flexing their muscles internationally and can’t wait to see what’s next.”

Producer, Brooke Silcox said, “The Award is testament to the talents of writer/director Alison James and the incredible team involved.

“Alison changed the course of her life from documentary film making to scripted after learning and being deeply affected by the JUDAS COLLAR practice in Australia.

“It goes to show that finding a voice for something you feel passionate about it can really make an impact. It is an absolute honour for JUDAS COLLAR to receive the award at the Austin Film Festival. We are excited about the Academy Award 2020 campaign we are now eligible to submit for.”

Find out more at the Judas Collar website: http://no-thing.co/judas-collar/

Judas Collar was Developed and Produced with support from Screenwest and Lotterywest and Executive Produced by WBMC and Walker Films.