The WA filmmaking team speak to us direct from the set of their new US thriller, 'Where All Light Tends to Go'.

Filming has begun in Atlanta for WA director Ben Young’s (Hounds of Love, Clickbait) new US feature Where all Light Tends to Go, starring Billy Bob Thornton and Robin Wright.

Joining Ben as the film’s Director of Photography (DOP) is WA cinematographer and longtime collaborator Michael McDermott ACS (Hounds of Love, The Furnace, Below), with the duo teaming up on set for the first time since Ben’s debut feature in 2016.

Where all Light Tends to Go will be Ben and Michael’s first international project together. With production having kicked off earlier this week, the duo spoke to us from set about the project, their working relationship and the differences between filming in Australia versus the US.

Congrats on directing ‘Where All Light Tends to Go’. What’s the premise of the film and what attracted you to the script?
Ben: Thanks! The story is about a young man born into a crime family in the Appalachian Mountains. On the cusp of adulthood he begins to question his predetermined destiny and flirt with the idea he may become something different to that of his forefathers. In essence it’s a story about breaking the cycle of intergenerational toxic masculinity. I’ve always been interested in stories about gender and the expectations society places on an individual because of it. Being a man, I’ve obviously faced my own struggles with understanding what it means to be one, and where I should be looking for role models. In times of late there has been a long overdue emphasis on equality, which has placed a necessary microscope on toxic male behaviour so, to me, a movie exploring where that might come from seemed appropriate. On top of that, Robert Knot’s script is just really f@#*ing good, so it was a no brainer to say yes to.

Were you involved heavily in casting?
Ben: Yep! Being an independent film I have been heavily involved in casting. Of course there have been other opinions, but ultimately in this instance the buck stopped with me. A welcome change!

Congrats on DOP-ing ‘Where All Light Tends to Go’ – how does it feel to be shooting your first US feature?
Michael: Thank you, yes it’s very exciting. As a cinematographer, it’s something you consider doing, which can be difficult from Perth. So in your career path, it’s a bit of a milestone I suppose.

Being an Australian cinematographer, was it a big process from Ben putting you forward to the producers, and you officially landing the gig?
Michael: I wouldn’t call it a big process but certainly a process that is fairly complex. This picture had been bubbling away for a couple of years. I know Ben always had me in mind to shoot it but it had a couple of false starts. I needed a visa to work in the US so had made enquiries about that. When the light turned green it was a case of fast tracking the application and crossing all the fingers.

How has pre-production been and are you feeling prepared for the shoot? How long are you filming for?
Ben: Pre has been interesting. All the usual hurdles with budget and locations, but I’m thrilled with all of the HODs and the crew they have put together. I don’t think you can ever be prepared enough so I’d love another 17 years of pre. That said, I have gone into the trenches and come out alive with less pre than I’ve had on this.

Tell us about the look, style and feel of the cinematography.
Michael: The story is one of conflict, internally and externally, so it’s important the cinematography works in lockstep with that. We’ll be keeping things fairly raw and authentic. I want this picture to have its own visual identity and life that fully supports the story and performances. We have an amazing cast that will do much of the heavy lifting and I don’t want the cinematography to distract from that.

How long have you both worked together, and what was your first collaboration?
Ben: Years! The first thing we shot together was a Water Corporation commercial produced by the wonderful Maggie Speak, who put Mick and I together because she thought we would vibe. Turns out she was right and we have done countless commercials and music videos together. This will be our second movie. It was probably around 8 years ago we first jammed.
Michael: We had the same sensibilities regarding a lot of things including filmmaking and enjoyed each other’s company. 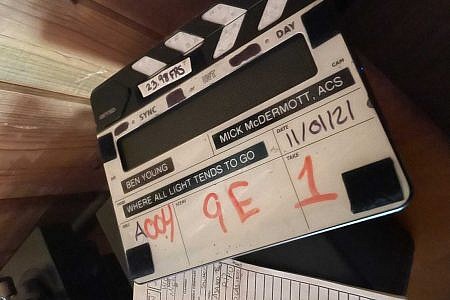 Can you describe your working relationship, how it’s changed over the years and how it’s unique? For example, do you have a shorthand together that you don’t have with others?
Michael: I describe our working relationship as equal parts of humour and respect. We’ve worked together a lot so obviously there’s a connection and we tend to find common ground on an aesthetic very easily. Story is everything to both of us so we always work toward moving that forward. It’s simply a case of liking each other’s work and bringing out the best in each other. If we have a shorthand it’s probably in what we both think is funny. Despite the subject matter of the films we’ve done together, we do have a lot of fun.

How does the scale of ‘Where All Light Tends to Go’ impact your collaboration – does working together feel different on this one compared to WA shoots?
Michael: The scale of this film isn’t too much bigger than films I’ve done at home but the US system is a little less fluid. Roles in production can be defined a little differently here and department responsibilities vary somewhat to Australia. Ben and my working relationship is unaffected though and we continue to work together as we would anywhere in the world.

I understand emerging WA filmmaker Ben Matei (‘Never Alone’) is on set shadowing you – what will he be doing and how has it been so far?
Ben: He’s been great. He’s been doing everything from storyboards and overhead maps, to helping me with music and distributing my documents.

Are you allowed to announce any other cast members?
Ben: Probably not haha. I will say the cast that has come together is top, TOP shelf. Many of the supporting players have carried successful movies of their own and started in very well-known productions. Very happy to say among the brilliant supporting cast are two Australians, one of whom is West Australian.

Will there be a production break for Thanksgiving? What do you guys have planned?
Ben: We stop shooting for four days but there will be no rest for the wicked! We’re moving our entire unit four hours out of Atlanta to shoot on more remote locations.

Will you be back home in Perth for Christmas?
Ben: If they let me back in!!
Michael: I very much hope so. Keep the vaccination thing going and my chances increase.

Read more about on Where all Light Tends to Go on Variety.