Aaron Pedersen as JAY with Jada Alberts as FRAN in MYSTERY ROAD S2...

THE BRIDGE’S Sofia Helin to star alongside Aaron Pedersen in the second series of award-winning drama MYSTERY ROAD, with Warwick Thornton and Wayne Blair at the helm

ABC and Screen Australia, in association with Create NSW and Screenwest have announced that THE BRIDGE’s Sofia Helin will star alongside Aaron Pedersen in the second series of Bunya Productions’ award-winning MYSTERY ROAD.

Series two sees Detective Jay Swan (Pedersen) take on a grisly case in a new town in order to be closer to his family, but has he left it too late? Set in a small coastal community where the desert meets the ocean, secrets past and present run deep and dark. Jay must reconcile the law and deep lore and confront a dangerous enemy in a world where deception is king.

Bunya Productions’ Greer Simpkin and David Jowsey said, “It’s very special to be back in the beautiful Kimberley to shoot the second series, with our brilliant collaborators and good friends, Wayne Blair and Warwick Thornton, vowing to serve up a brew of tropic gothic outback noir.”

“A brilliant cast, led by Aaron Pedersen and Sofia Helin, will again entertain and inspire audiences driving down that MYSTERY ROAD to seek our nation’s true identity.” 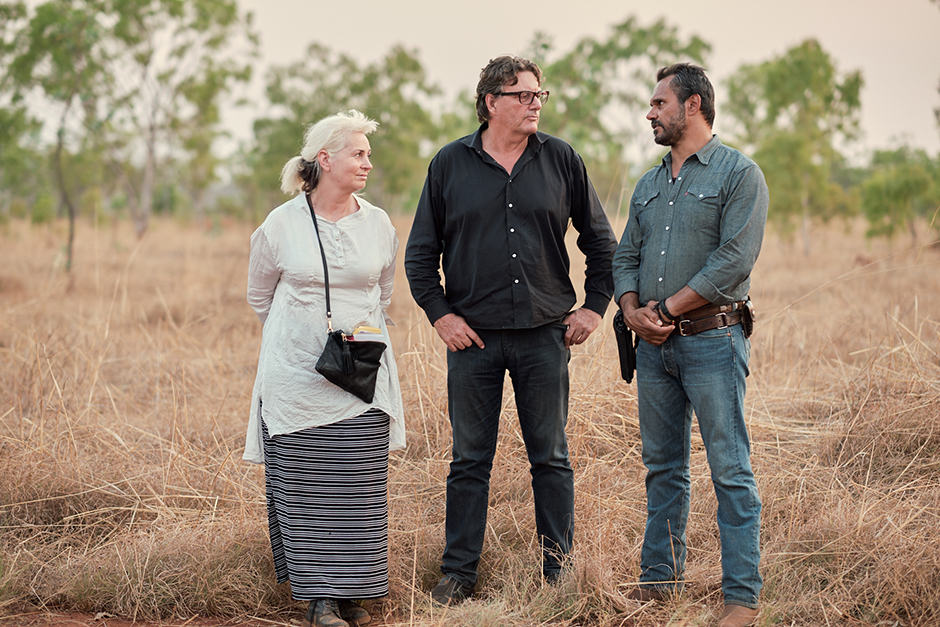 Producers Greer Simpkin and David Jowsey with Aaron Pedersen on the set of MYSTERY ROAD S1, a Bunya Production for ABC TV. Photo by Jack Friels.

ABC’s Head of Scripted Content, Sally Riley said, “The overwhelmingly positive response to series one of MYSTERY ROAD, from both critics and viewers, has been extraordinary.”

“Australians have gravitated to this unique homegrown story and we know that series two, with its exceptional cast and crew, will be no different.

“Taking home the award for Most Popular Drama Program at the recent TV Week Logie Awards has underscored that Australia is behind this series and the ABC looks forward to sharing the next instalment with them.”

Screen Australia’s Head of Indigenous Penny Smallacombe said, “MYSTERY ROAD was the critical and ratings hit of 2018, garnering fans at home, in the UK and the US.”

“After Rachel Perkins’ extraordinary work in season one, and with Wayne Blair and Warwick Thornton joining for season two, MYSTERY ROAD is the definition of powerhouse Indigenous-led TV drama.”

“The producers also set the standard in terms of community engagement, not least with the superb Indigenous storylines, cast and crew.

“Screenwest and the Western Australian Regional Film Fund are delighted to have series two shooting in another equally spectacular part of our state in the Dampier Peninsular and Broome.”

Aaron Pedersen as JAY on location in Western Australia for MYSTERY ROAD S1, a Bunya Production for ABC TV. Photo by John Platt.

Create NSW Acting Executive Director Investment and Engagement Grainne Brunsdon said, “We were as pleased as anyone about the terrific success of series one and delighted that in series two we can once again bring post-production for the show back to NSW where it will be completed.”

All3media International’s CEO Louise Pedersen said, “The first season of MYSTERY ROAD is proving to be hugely popular with our global broadcast clients and audiences.”

“With Sofia Helin joining a wonderful cast, Aaron Pedersen reprising his role as Detective Jay Swan and Warwick Thornton and Wayne Blair directing an intriguing new mystery story, we’re confident the second season will be equally as successful, and we are thrilled to be partnering with ABC and Bunya Productions again.”

In addition to the first season’s TV Week Logies success, MYSTERY ROAD Series One has been a magnet for awards, taking home accolades and nominations at the 2018 AACTAs (including winning Most Outstanding Drama), the Equity Ensemble Awards, the Australian Writers Guild Awards, the Location Managers Guild International Awards, and the Screen Producers Australia Awards.

MYSTERY ROAD Series Two is produced by Bunya Productions and Dark Matter Media for the ABC, with funding support from Screen Australia’s Indigenous Department, Screenwest, the Western Australian Regional Film Fund supported by Royalties for Regions and Create NSW, in association with all3media International who will handle the international sales. The series will air on the ABC in 2020.