Based on the award-winning and Man Booker shortlisted Tim Winton novel, DIRT MUSIC is a gritty, sexy drama with a haunting love story at its heart set against the powerful backdrop of Western Australia’s evocative landscape.

Producers Finola Dwyer and Amanda Posey of Wildgaze Films commented: “We’re honoured to bring Tim Winton’s iconic novel to screen, masterfully adapted by Jack Thorne, and with the vision of Gregor Jordan who has assembled the perfect cast; Aquarius are our ideal partners along with Film4 who developed with us from the start.”

Golden Globe and BAFTA Award nominee Kelly Macdonald (PUZZLE, NO COUNTRY FOR OLD MEN, BOARDWALK EMPIRE) and Garrett Hedlund (MUDBOUND, TRON: LEGACY) have been joined by acclaimed actor David Wenham (LION, TOP OF THE LAKE, THE LORD OF THE RINGS).

Complimenting the musical backbone of the film, award-winning singer-songwriter and multi-instrumentalist Julia Stone (of internationally acclaimed Australian sibling duo Angus & Julia Stone) will bring her collaborative talents in her role as Sal.

Angie Fielder and Polly Staniford from Aquarius Films said: “We are thrilled to be collaborating with Wildgaze Films in bringing Jack Thorne’s stunning adaptation of this much-loved Australian love story to the big screen.

“Winton is an Australian literary legend with a dedicated fan base, and DIRT MUSIC is a globally acclaimed book. With accomplished director Gregor Jordan at the helm, along with our brilliantly talented cast and creative team, we feel the alchemy is there for a fantastic movie.”

Heads of Department include: 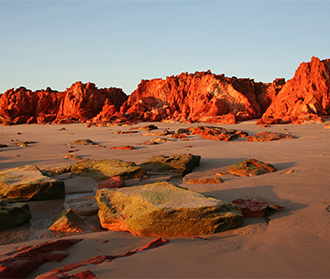 Screenwest’s Interim CEO Peter Rowe added: “This is such an exciting time for production in WA and Screenwest is committed to supporting creative storytelling that showcases our beautiful State and the stunning WA locations hand-picked for this film compliment Winton’s novel as a love song to the land and place of his home state.

“From Esperance’s stunning white beaches in the south to Cape Leveque’s red rocks in our north, WA’s diverse landscapes will be showcased on screen like never before.”

DIRT MUSIC is a film about people whose hopes and dreams are lost, and the redemptive power of love.

Georgie (MacDonald), sometime sailor, diver and nurse used to have guts, but somehow she has lost her way. Stranded in a remote fishing town on the West Australian coast she’s living with a man she doesn’t love, Jim (Wenham) and his young sons whose dead mother she can never replace.

But a reckless moment leads to a life-changing encounter with Lu (Hedlund), an enigmatic loner, one-time musician and sometimes poacher, outcast from the community. The two are powerfully drawn to each other and embark on an inescapable, intense and sexually charged affair.

DIRT MUSIC is a Wildgaze Films and Aquarius Films production with major production investment from Screen Australia in association with Film4. It was financed with support from the West Australian Regional Film Fund (WARFF) and Screenwest with Ingenious Media.

Executive producers are Daniel Battsek, Sue Bruce-Smith and Lauren Dark for Film4 and Peter Touche and Stephen Dailey for Ingenious.