Screenwest, in partnership with DADAA, proudly supported THE OTHER FILM FESTIVAL, held last... 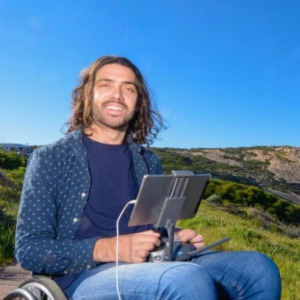 Jaimen Hudson, a regionally-based drone camera operator/filmmaker, who acquired quadriplegia through a motorbike accident in his late teens, is one example of how specific diversity funding programs help overcome barriers to the industry.

Jaimen worked with Sea Dog International TV to design a mentorship and skills development program to help him attain the skills needed to further his career.

Speaking at The Other Film Festival, Jaimen recounted some of his experiences being mentored by a production company of the calibre of Sea Dog International TV.

“Leighton talked me through time lapses, I learnt to edit with different software, worked alongside their head editor, saw different techniques they used. There was a huge amount packed into the two weeks but it was interesting to get an inside look of how a professional production house works.”

Leighton De Barros talked about the impact Jaimen had on the production company.

“We helped Jaimen because ‑ I think the biggest thing being in the regions –  you don’t get that support, there’s no networks. He’s doing wonderful stuff all of his own accord and we thought we should give him a hand.

“Ultimately Jaimen’s passion and dream is to become a wildlife photographer and we’re going to help him do that and we were lucky enough to get some money through Screenwest and we did the mentorship for him and it was a great experience!”

Sea Dog International TV and Jaimen plan to work together again, with a project already in the pipeline.

“I just want to say a huge thank you obviously to Leighton and Jodie,” Jaimen said at the panel.  “They really have taken me under their wing. Also a huge thank you to Screenwest for the funding that they provided to help me change my dreams.”

For more on Screenwest Diversity Funding programs and the work that Screenwest is undertaking to promote greater inclusivity in the screen sector, please refer to diversity pages on the Screenwest website:  https://www.screenwest.com.au/funding-support/diversity-equity-inclusion/