Veronica commenced her six-month, paid Screenwest / ABC Children’s Television Diversity Internship in early February and has already taken on the responsibilities of Runner and Production Assistant for a variety of shows.

Michael Carrington, ABC Head of Children’s and Education welcomed Veronica to the offices in Ultimo. 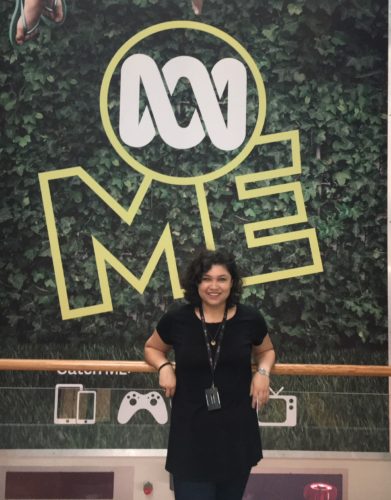 “ABC Children’s is becoming more distinctive, diverse, ambitious, open to talent, hungry for ideas, and willing to take audiences to new places, or to revisit familiar places in new ways.  To do that, we need to attract a diverse group of people to join us.  We are constantly looking for new opportunities to encourage, coach and nurture new behind the scenes talent in the children’s industry.  We are thrilled to be working with Veronica Light as part of our Screenwest / ABC Children’s Television Diversity Internship program”.

“The experience Veronica will gain in the next six-months will prove to be invaluable for her career.  Nothing is better than being on the ground in the thick of the action and Veronica can take what she learnt as a student and apply it to real filmmaking,” said Seph.

Veronica Light expressed her excitement and commented on her first few weeks at ABC Children’s.

“It’s an incredible experience working with people who are passionate about creating high quality content. Every day I’m working on something different, which is allowing me to get the most out of my time here.

“This internship will be the stepping stone I need to transfer from being a film student to a practitioner. I have the utmost respect for the ABC as their principle of educating and entertaining all kinds of Australians perfectly aligns with my own world views,” said Veronica.

The ABC Children’s Television Diversity Internship, launched at part of Screenwest’s Diversity, Equity and Inclusion Plan in September 2017, was designed to enable a Western Australian practitioner to build their professional experience, expand skills in creative development, and develop contacts within the ABC’s busy production team environments.

There was a high level of quality applications, a clear indication that there is an abundance of talented emerging practitioners with diverse backgrounds across the State and making the two-stage assessment process very competitive.

Veronica grew up in Australia with an immigrant mother from the Philippines and a white Australian father. She sees herself as part of a new generation of mixed heritage Australians, capable of educating and informing others about both cultures.