Minister for Culture and the Arts, The Honourable David Templeman officially opened the...

Minister for Culture and the Arts, The Honourable David Templeman officially opened the majorly upgraded facilities of the WA Screen Academy on Thursday, 15 February 2018 at Edith Cowan University.

Recognising that almost all screen industries around the world are now fully digital, the Academy’s base at the Mount Lawley Campus has been designed around the new technology. 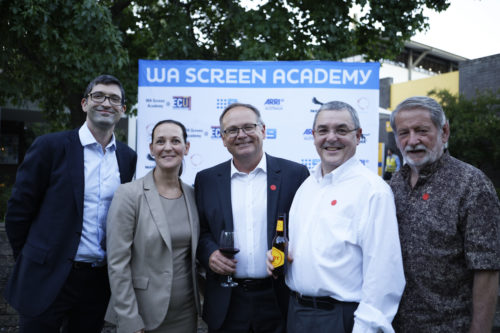 WA Screen Academy Director, Dr Cathy Henkel, oversaw the development of the new facilities and said they have been designed and built with consideration for both current and future production environments.

“Students will have access to the most advanced training facilities in Western Australia. They can learn and experiment with the latest ARRI Alexa cameras, Panther Dolly, virtual reality equipment and a state-of-the-art output room and post-production facilities enabling them to produce high quality work and be competitive at international film festivals,” Dr Henkel said.

The new output suite will be named after internationally acclaimed cinematographer Don McAlpine, who attend the event to accept the honour.  Mr McAlpine, who has shot 56 feature films and been nominated for both BAFTA and Oscar Awards, was awarded the 2011 AACTA Longford Lyell Award, the highest honour that the Australian Academy can bestow upon any individual.

Janelle Marr, Chair Screenwest who is also a Council member of ECU congratulated Dr Cathy Henkel and her team for bringing the project to life.

“These facilities will provide WA’s emerging filmmakers with access to the same facilities used by leaders in the industry around the world.  Creating Western Australian stories using advanced technology and in a space which encourages creativity reflect in the quality of the films made,” said Mrs Marr.

The WA Screen Academy is part of the School of Arts and Humanities at Edith Cowan University.

The WA Screen Academy is a member of the prestigious International Association of Film and Television Schools, CILECT. It is one of only five-member schools in Australia (and the only one in Western Australia).