Aaron Pedersen as JAY in MYSTERY ROAD - THE SERIES. A BUNYA Production for...

Aaron Pedersen as JAY in MYSTERY ROAD – THE SERIES. A BUNYA Production for ABC TV. Photo by John Platt.

Bunya Production’s MYSTERY ROAD – THE SERIES, which aired on the ABC in 2018, has been nominated for a Location Managers Guild International (LMGI) Award for Outstanding Locations in a Contemporary Television Series.

THE LMGI AWARDS are an internationally recognised celebration of the outstanding contributions of location professionals in feature films, television and commercial advertising.

The Awards spotlight the craft of location management, honouring productions in which the creative use of filming locations set the tone, enrich the character and inspire the storytelling narrative.

“Initial conversations about scouting for MYSTERY ROAD – THE SERIES were centred around exploring how the locations would build the real story world of Patterson and simultaneously affect the characters in the series,” said Location Manager Brett Dowson.

“Whether we were enhancing the audience’s perception of character, inhibiting their ability to achieve a goal, isolating them from society, or evoking compassion and warmth,  Miriwoong-Gajerrong (Kununurra and surrounds) and Balanggarra (Wyndham and surrounds) country offered the elements we needed, always coupled with an air of beauty and danger.

“It was a rare full package, everything was shot on location, which inspired every department as well as the cast members. It was a real privilege to showcase this stunning location to the world.” 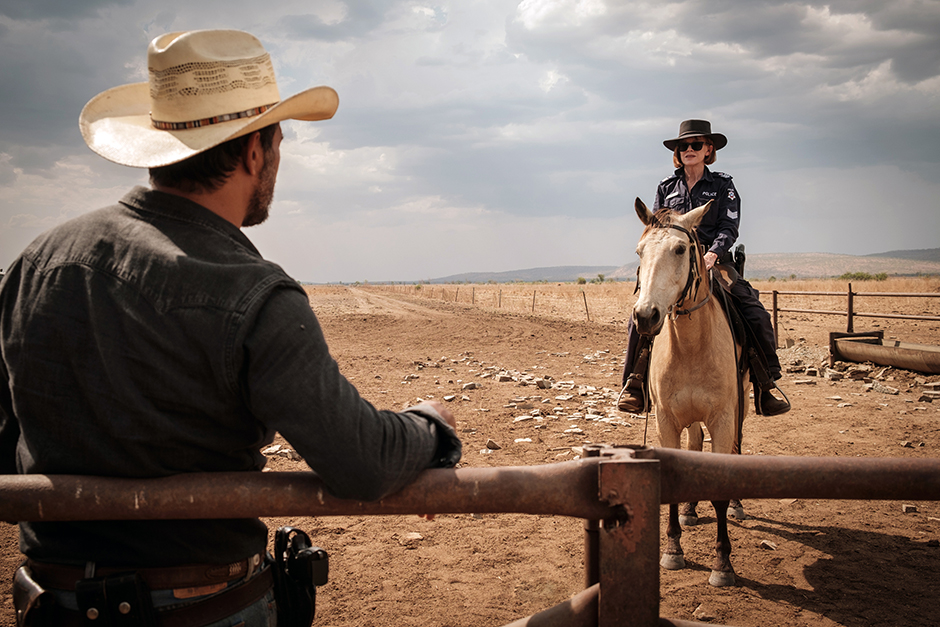 Aaron Pedersen as JAY and Judy Davis as EMMA in MYSTERY ROAD – THE SERIES. A BUNYA Production for ABC TV. Photo by John Platt.

Filmed in the East Kimberley region of Western Australia, MYSTERY ROAD has been praised by both critics and the general public for the atmospheric landscapes featured in the series.

The Guardian stated, “Mark Wareham’s cinematography assists in capturing a landscape that goes beyond merely an eye-catching backdrop… the visual imagery gives the series a cinematic feel but it also gives the land such a strong presence that it feels like an antagonist in the story.”

MYSTERY ROAD – THE SERIES was produced by Bunya Productions for the ABC with funding support from Screenwest, Screen Australia, the Western Australian Regional Film Fund supported by Royalties for Regions and Create NSW, produced in association with all3media International who will be handling the international sales.

Series two of MYSTERY ROAD – THE SERIES is currently in production and will air on the ABC in 2020.”

For more information about filming in Western Australian, please contact: