GALCAC Aboriginal Film Festival 2022 is kicking off next Monday for NAIDOC week, with the festival set to deliver five days of free community screenings to Kalgoorlie-Boulder audiences.

Now in its 5th year, the festival is run by the Goldfields Aboriginal Language Centre Aboriginal Corporation (GALCAC). It was developed to bring attention to the use of Aboriginal languages in film, promote and inspire Aboriginal filmmaking and enrich the Kalgoorlie community leading to discussion about interpretation of Aboriginal culture through film.

The festival’s Nintila 5 Minute Phone Film Competition has also returned for 2022, encouraging aspiring Goldfields-based Aboriginal filmmakers to create and submit a short film between 3-5 minutes in length. All films are shot and edited on a smartphone, with half of the dialogue required to be in a Goldfields Aboriginal language and/or use Goldfields Aboriginal sign language or subtitles. The three 2022 winners will see their films screen on Thursday, 7 July before the 2021 documentary Ablaze, which tells the true story of the first Aboriginal filmmaker, Bill Onus.

“GALCAC has worked incredibly hard to bring this film festival celebration of First Nations culture and language to the Goldfields community during NAIDOC week. We’re proud to be supporting this festival once again and look forward to seeing audiences enjoy the thoughtfully curated program.” said Devina McPherson, Screenwest Indigenous Executive. 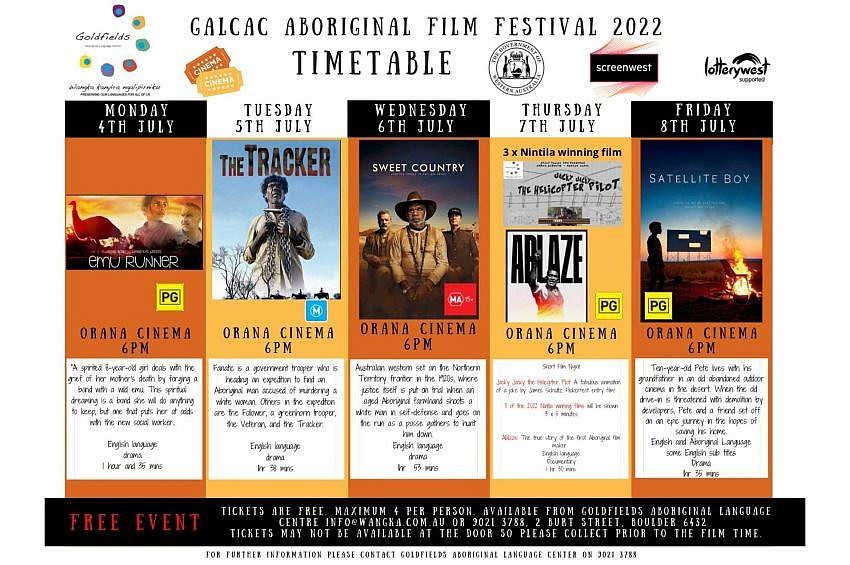