H IS FOR HAPPINESS won the coveted prize on Saturday night after glowing reviews from the Film Prize jury and audiences who saw the film at its WA premiere.

The Film Prize winner was decided by a jury of five esteemed members of the film industry including Marta Dusseldorp, Glenn Gainor, Alex Dimitriades and Ben Young, led by Jury Chair Rachel Ward. The jury watched each of the Film Prize finalists with an audience at CinefestOZ before coming together to deliberate and determine the winner.

Speaking on behalf of the Jury, Ward said, “If we have the power as jurors to change the world to be a better place, then voting for H is for Happiness to win the CinefestOZ 2019 is our contribution. As juror Alex Dimitriades added, H is also for Hope.”

Director John Sheedy said, “Creating any piece of story-telling – be it film, television or theatre – is above all else a collaborative process. I have been incredibly fortunate to have some of the best arts practitioners in the industry – actors, creatives, producers and crew – to help guide me and inspire me throughout the entire production. Whether they know it or not, they have all added their own touch of magic in assisting me to create what I hope is a truly unique and entertaining film for the ages.”

Sheedy added: “This is incredible. It’s such a prestigious prize. The competition was so tough. There were five amazing films, I saw all of them. To be chosen in such good company is wonderful and to be here at CinefestOZ it’s amazing.”

H IS FOR HAPPINESS is the second WA film to win the film prize, with Paper Planes taking the prize in 2014. It shows a strong continuing journey of filmmaking in WA.

Screenwest CEO Willie Rowe said, “This is an amazing accomplishment for a WA film and is a testament to the strength of WA creatives inspiring work. H IS FOR HAPPINESS is a wonderous and joyful film with break out performances from both the cast and crew and I can’t wait to watch the successful journey the film goes on from here.”

H IS FOR HAPPINESS was produced with funding from the Western Australian Regional Film Fund supported through Royalties for Regions, the Regional Development Commissions and with production funding from Screenwest and Lotterywest.

Shot in Albany of the Great Southern region, the film showcases diverse landscapes, from the forests of The Pines Lake Park to the gorgeous coastlines like Middleton Beach Lookout, as well as the picturesque architecture of the main town, giving these locations a spotlight nationally and internationally. It’s these great outcomes and the great economic outcomes that filming can have to a region that underlines the importance of WARFF funding.

About Filming in Albany

Set and filmed in the colourful Western Australian coastal town of Albany, H IS FOR HAPPINESS is a classic feel-good film for all ages that will make you laugh, cry, and cheer with delight, based on the award-winning book “My Life as an Alphabet” by Barry Jonsberg.

Producer Tenille Kennedy stated that it didn’t take long for the production to choose its hometown.

“Albany was the very first town that we came to and we knew instantly that it was A for Albany,” Kennedy said.

“It’s been amazing shooting here. I’ve spent Christmases with family here growing up as children, and I’ve got my uncle and aunty here who’ve been part of the film as well. So that’s been really delightful. Albany is just so beautiful. It’s so cinematic, it looks amazing on the screen, and it creates this beautiful world for the story that we’re telling.”

Kennedy added, “It’s a real honour to… accept the Film Prize on behalf of the H IS FOR HAPPINESS TEAM. It was such a treat to screen to our hometown audience.” 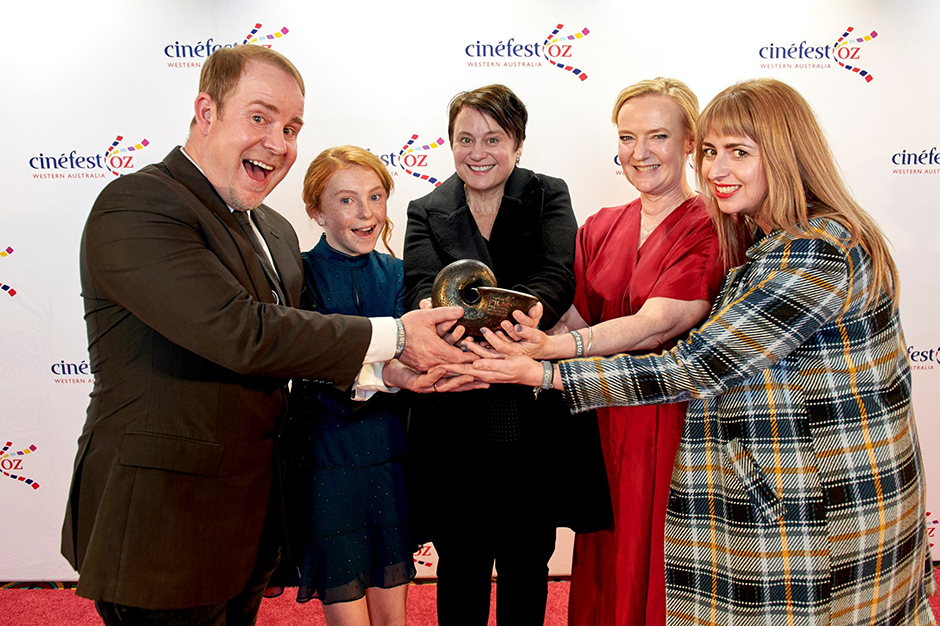 John Sheedy said, “For me, the setting of this story is very important. It’s set in a small, charming, quirky seaside town. It had to be a place that could be picked up and placed anywhere in the world.

“I didn’t really want it to be geographically specific. What I love about Albany is that it has a sense of old-world charm in its architecture, in its landscape. It has quirky hills and boulders, a beautiful bay, and for me, I could be anywhere in the world, in this story. And that’s what I want, and that’s what I saw in Albany, and what I loved about it.