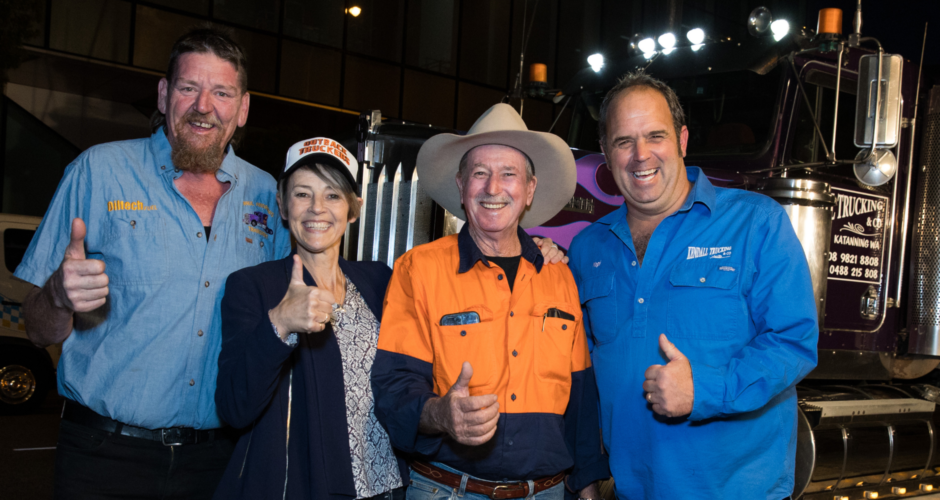 With its down-to-earth, loveable cast of characters and nail-biting trucking journeys, Outback Truckers, currently in its 9th season, continues to enthral and entertain fans, locally and around the world. Currently distributed by Flame Distribution, the series has aired in over 220 countries.

Thanks to Screenwest and the State Government of Western Australia’s support through Lotterywest and the WA Screen Fund, the show is well-known in the Australian screen industry for the impact it’s had on the careers of local and national screen practitioners.

Produced by Fremantle based Prospero Productions, the multi award winning company behind documentaries and factual series such as Outback Opal Hunters, Railroad Australia, Whale Super Highway and Batavia Revealed, Outback Truckers celebrates Australia’s unsung heroes as they drive the biggest trucks on earth along the toughest roads and loneliest highways in the world.

Outback Truckers Executive Producer Julia Redwood says the loyal fanbase is what makes the series so special. “It’s been brilliant to watch the number of fans grow over the 9 seasons and it has now achieved cult status around the world! People love the show and really appreciate the hard work the truckers do over long distances and on our craziest outback roads.”

“The series has contributed significantly to the employment of West Australians in the screen industry. Returning series offering long contracts and an opportunity to upskill has meant that many local practitioners have chosen to stay in WA, as opposed to seeking work elsewhere,” Redwood said.

This long running series reaches its 100th episode milestone with support though Screenwest and Lotterywest over its 9 seasons. Not only has it provided crew capability and development pathways for the local industry, it continues to deliver incredible economic outcomes for Western Australia and tells the stories of some of the most resilient and hard-working truckers in the world – showcasing them and the incredible Western Australian landscape, globally.

Outback Truckers is produced by Prospero Productions for 7 Network Australia. The series airs Tuesdays at 8.30pm on 7Mate and the 100th episode is available on demand via 7Plus.