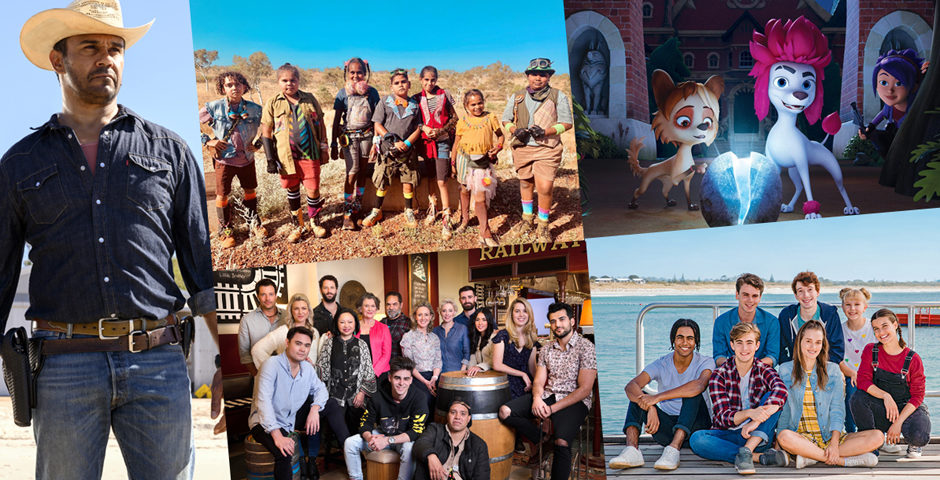 ABC has just announced five Screenwest supported Western Australian TV series will screen on the network in as part of their 2020 slate.

The ABC has today announced 5 amazing Western Australian, Screenwest supported TV series, will be broadcast in 2020.

Children will be enthralled by the new fast-paced action-thriller ITCH created by Komixx Entertainment in association with Feisty Dame Productions, which has a strong focus on climate change. Kids will also enjoy clever animated comedy 100% WOLF, a Flying Bark and Super RTL production, a project that engaged WA’s Francesca Hope from Siamese as an associate producer. High quality programming for children continues with THALU a Weerinanna Street Media production, which places Indigenous stories front and centre.

Returning programs include viewer favourite and gritty drama MYSTERY ROAD Series 2, which was filmed in the East Kimberly and a second series of THE HEIGHTS, which is fast becoming a much-loved ABC staple.

“It is wonderful to see the ABC’s commitment screening high quality screen projects from Western Australia, and we look forward to seeing these unique stories released throughout 2020,” explained Franziska Wagenfeld, Development and Production Executive at Screenwest.

The Western  Australian Regional Film Fund has supported 3 of the 5 series to be screened including ITCH, THALU and MYSTERY ROAD, contributing to telling unique Western Australian stories and showcasing the stunning filming locations Western Australia has to offer.

“Western Australia is rich in talent, diverse stories and stunning filming locations. We’re thrilled to have supported these engaging and creative series through our funding received from Lotterywest and the Department of Regional Development and Primary Industries through the Western Australia Regional Film Fund.  We are delighted that the ABC will be screening these projects to audiences across Australia in 2020,” explained Willie Rowe, CEO of Screenwest.

Western Australian Productions to Screen on ABC in 2020

Children all over the world are concerned about climate change. What if we put the solution into their hands? ITCH is a fast-paced action thriller, that does just that.

In this adaptation a smart but flawed hero, Itchingham Lofte finds a new element on the periodic table which could be the world’s solution to our energy problems. In the midst of all, the conspiracy and scientific discoveries is a very human story about the strains of growing up, regional family life, fitting in and thinking through one of the world’s biggest ethical dilemmas. What will Itch choose?

So what if he’s a pink poodle? Freddy Lupin knows he’s got what it takes to run with the elite werewolf Night Patrol. All he has to do is win a prestigious Howlington Academy, keep his fluffy butt out of trouble and graduate. Easy-peasy right? WRONG

Being the first dog at a werewolf-only finishing school is tougher than Freddy ever imagined. With the hopes of dogs everywhere resting on his curly pink shoulders, Freddy knows failure is not an option. He HAS to pass this year. Teaming up with his ragtag bunch of schoolmates and best frenemy Scarlet, a teen werewolf hunter, Freddy must harness his wolfish side and embrace his own inner poodle. He may be fluffy and groomed, but it turns out that Freddy Lupin is 100% hero!

A Flying Bark Production for the ABC (Australia) and Super RTL (Germany) with international rights and distribution through Studio 100. Principal production investment from Screen Australia. Financed with support from Screenwest and Screen NSW.

With their country under threat from a huge dust cloud and the mysterious Takers that lurk within a small group of Indigenous kids has to make their way to the Thalu, a place of great power, in order to stop the cloud before it destroys everything in its path. Along the way they encounter friends and foe alike as they search for eight sacred stories and a special key that will unlock the power of the Thalu and, they hope, stop the Takers in their tracks.

THALU is a Weeriana Street Media production for NITV and ABC.
Principal production investment from Screen Australia, in association with Screenwest and the Western Australian Regional Film Fund.
Financed with support from NITV, with ABC.

A mangrove swamp. And endless sky. A headless body.

Detective Jay swan takes on a grisly case in order to be closer to his family, but has he left it too late? Set in a small coastal community where the desert meets the ocean, secrets past and present run deep and dark Jay must reconcile the law and deep lore and confront a dangerous enemy. It’s a world of cults, carpetbaggers and smugglers, of ruined churchmen and crazed archaeologists.

Produced by Bunya Productions and Dark Matter Media for the ABC, with funding support from Screen Australia, Screenwest, and the Western Australian Regional Film Fund supported by Royalties for Regions and Create NSW, in association with all3media International who will handle the international sales.

THE HEIGHTS is a critically acclaimed series that centres on the inner-city neighbourhood of Arcadia Heights, exploring the relationships between the residents of Arcadia social housing tower and the people who live in the rapidly gentrifying community that surrounds it.

Series two continues to showcase the life-affirming, family-friendly storytelling audience have come to expect. With THE HEIGHTS’ trademark balance of heart, humour and truth, we’ll see our favourite characters pull together to triumph over whatever life throws at them.