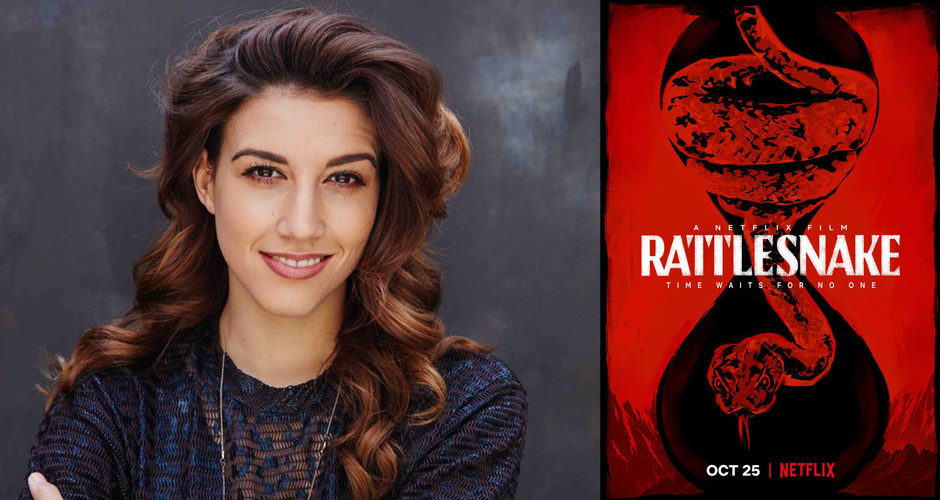 Nell was thrilled to score the role of the Australian hiker in the pulse-pounding, psychological horror film, written and directed by Western Australian director Zak Hilditch (1922, THESE FINAL HOURS).

Nell got the role after impressing Hilditch and his partner, Alison James (writer/director of the internationally-acclaimed short film, JUDAS COLLAR) with her performances in a number of Perth productions – including James’s short film, YOU HAVE BLUE EYES which premiered at the A Celebration of WA in LA event hosted by Australians in Film in Los Angeles in 2017.

“I remember waking up to an email from Zak a few hours before hearing from the casting office saying I got the part. I think my heart stopped when I read the congratulatory email. Working on a feature film in New Mexico, let alone on a Netflix set with cast and crew heavyweights, has been an absolute career highlight. I’m so grateful that the team saw something in my audition tape,” said Nell.

RATTLESNAKE stars Carmen Ejogo (TRUE DETECTIVE, THE GIRLFRIEND EXPERIENCE) as Katrina, a single mother driving cross country to start a new life with her daughter (APOLLONIA PRATT) when their car breaks down smack in the middle of nowhere and Clara gets bit by a rattlesnake. Desperate to save her daughter’s life, Katrina accepts the help of a mysterious woman who saves Clara’s life, but Katrina quickly learns nothing comes without a cost when she learns she has to kill a stranger in exchange for the life that was saved.

The project comes after Hilditch’s adaption of Stephen King’s 1922.

RATTLESNAKE is the first of two films featuring Nell to be selected to premiere at AFF. The second is the short film, I’M NOT HURTING YOU, written and directed by David Vincent-Smith in which Nell stars as Megan, a desperate woman who kidnaps and forces rehab on her dangerous, younger meth-addicted brother, in a last-ditch effort to save his life. I’M NOT HURTING YOU was funded through Screenwest’s Feature Navigator Program. Vincent-Smith will be attending the festival later this month where the short will screen in the festival’s shorts program.

Alexandra Nell in I’M NOT HURTING YOU.

Nell goes on to discuss the international success of Screenwest’s Elevate funded web series SINGLE LADIES (2019) which she stars in and co-created alongside Megan Hollier and Aaron Moss. SINGLE LADIES screened in official selection at the 2019 Pilot Light TV Festival, Seoul and Sicily Web Festivals, Melbourne WebFest and Rio Webfest 2019 with Nell and her co-star Megan Hollier’s performances nominated for Best Comedy Ensemble in the latter. The 6-part web series tells the story of a controversial radio show run by two strong, confident women attempting to navigate the murky waters of relationships.

RATTLESNAKE premieres worldwide on Netflix on Friday, 25 October 2019, I’M NOT HURTING you will be screening at Austin Film Festival 2019 and SINGLE LADIES is streaming now at hyvio.com/singleladies.