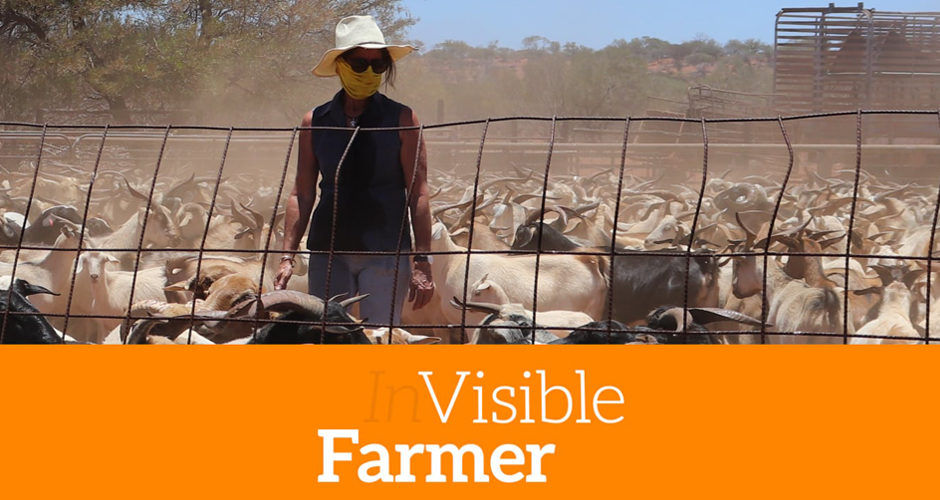 VISIBLE FARMER: A New Series that will Change the Face of Agriculture

It’s time to put a spotlight on the hidden face of agriculture.

Half of all you eat is produced by women. Women make up 50% of the rural workforce.

They generate half of all farm income.

Yet if you Google ‘Australian farmer’ in 2019, 90% of all images show white middle-aged men.

VISIBLE FARMER is a ground-breaking short film series that will shatter stereotypes and change the face of modern agriculture.

It discovers the untold stories of the gutsy women behind our food and fibre, and the vital, innovative role they play. From remote outback stations to urban market gardens, VISIBLE FARMER will change our perception of who a farmer is.

“The days of the solo man running the station on his own and gazing off into the sunset, they’re over,” said Debbie Dowden, a pastoralist from Challa Station. Debbie is one of the passionate women profiled in the first season of 15 short films, each about 6-minutes long.

On Wednesday, 28 August 2019, VISIBLE FARMER’s first episode will be launched at WA’s largest annual agricultural event, the Dowerin GWN7 Machinery Field Days, as part of their theme “Celebrating Our Story”. Simultaneously the episode will be released for free sharing across multiple digital platforms – VISIBLE FARMER’s Facebook, YouTube and at www.visiblefarmer.com. After the launch, a new episode will be posted every two weeks.

This nationwide project has a social impact campaign built around it. At its heart VISIBLE FARMER is about gender equality and food security, with strong, positive stories from Australia’s farming communities.

VISIBLE FARMER has received principal production investment from Screen Australia, funding from Screenwest and is sponsored by CSBP, working closely with impact partners including RRR Network, The Rural Room, NRWC, CWA, AWiA, DPIRD, NFF, WAFarmers, PIEFA and is raising funds for outreach and education campaign via the Documentary Australia Foundation.

“Women have been the backbone of agriculture since farming began in this country. Yet for many reasons, their contribution continues to go under-recognised. VISIBLE FARMER, a fantastic and crucially important initiative, is finally bringing the stories of our farming women to the fore. The NFF is a proud supporter of Visible Farmer,” said National Farmers’ Federation (NFF) President Fiona Simson.