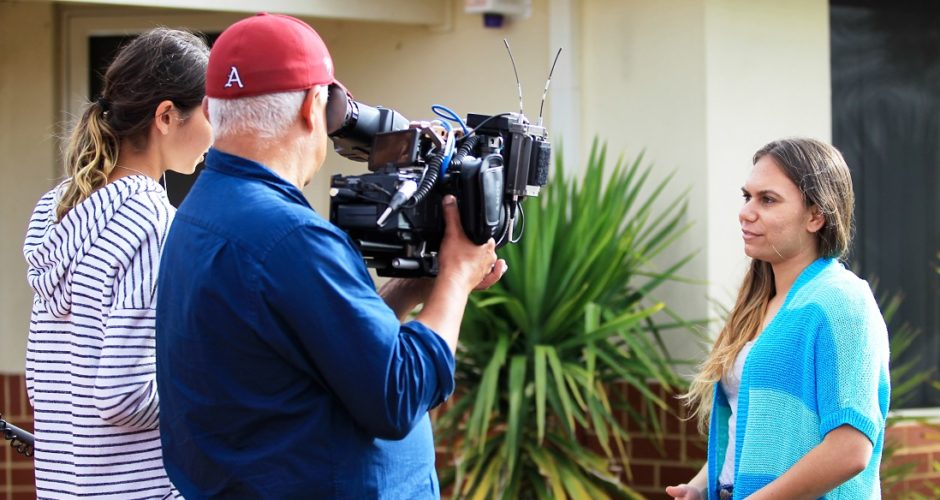 The third instalment of the FROM THE WESTERN FRONTIER series examines the legacies of the Stolen Generations policies through the eyes of young Aboriginal women.

THE THIRD SPACE, written and directed by Casey Kickett, is the first of two half hour documentaries that make up FROM THE WESTERN FRONTIER Series 3, airing Monday, 22 May at 7:30pm on NITV.

Fair-skinned Noongar girl, Meeka Rees, struggles to fit into an Aboriginal world despite her grandmother being prominent Aboriginal artist, Sandra Hill. She goes on a personal journey with her grandmother, mother and sister to understand how an ideology, based on skin-colour, underpinned the Stolen Generations policies and continues to impact on her family’s ability to identify and connect with their Aboriginality today.

“We are never finished in our personal learnings of who we are and what we stand for, however the sooner we begin to learn who is shaping us and whether those entities are negative or positive, we begin to have control over our identities – and that is what I wanted for Meeka,” said Kickett.

THE THIRD SPACE is Kickett’s first documentary film and she has since been commissioned to produce a 15-minute documentary under NITV’s Our Stories, Our Way, initiative.

Kickett is a Noongar and Australian woman from Perth who completed a BA, majoring in Communication Studies and Indigenous Studies in 2014, and progressed to a Graduate Certificate in Adult and Tertiary Education in 2015.  Kickett has held many roles within the local Indigenous community including active board member for Noongar Radio and Associate Lecturer in the School of Indigenous Studies.

The second half hour documentary, OWNING YOUR HISTORY was written and directed by Kimberley Benjamin and follows Young Noongar dancer, Brianne Yarran as she goes on a journey to create a solo dance routine that tells her Nannas’ Stolen Generation story.

“I hope that young people will watch this film and be inspired by Bree’s journey and want to learn more about their own family’s history. I hope it also shows the importance of young people knowing their history and how empowering it can be for our young people,” said Benjamin.

“This film is for non-Indigenous people too. The Stolen Generations is a significant part of our Country’s history and something we should all know about and understand.”

Benjamin is 23-year-old Yawuru, Bardi and Kija woman from Broome who graduated from Curtin University with a Bachelor of Arts majoring in Journalism and has been living in Whadjuk Noongar Country for seven years.  She co-hosts Noongar Dandjoo, a current affairs program produced by Curtin University students and broadcasts on NITV.

OWNING YOUR HISTORY is Benjamin’s first half hour documentary.

OWNING YOUR HISTORY airs the following Monday, 29 May at 7:30pm on NITV.

FROM THE WESTERN FRONTIER is produced by Renee Kennedy, Metamorflix Pty Ltd.  The series is developed and produced with the assistance of Screenwest and Lotterywest and produced in association with National Indigenous Television (NITV).  The FROM THE WESTERN FRONTIER series has resulted in seven half-hour documentaries, including ANGELA’S RULES (2015) which led into the acclaimed six part documentary series, FAMILY RULES on NITV.