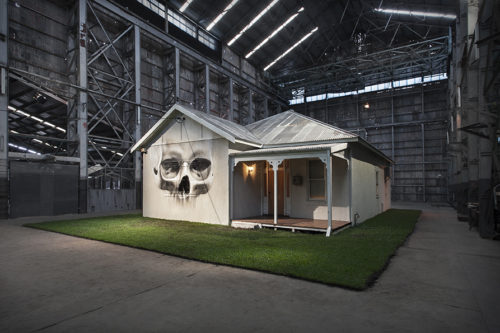 Internationally renowned Western Australian visual artist Ian Strange is director and co-writer of HOME: The Art of Ian Strange, ABC’s original 6-part iView exclusive series on the last eight years of his career. The series is produced by Transmedia for Change.

The Art Bites initiative, jointly convened by ABC iView and Screen Australia, selected four films, two of which were from Western Australian filmmakers: HOME: The Art of Ian Strange and Shock Art.  The initiative called for early career directors and/or producers to explore uncharted aspects of Arts in Australia, creating stories that are accessible, engaging and entertaining.

HOME: The Art of Ian Strange provides the audience with a behind the scenes style look at how Strange uses suburban homes around the world as his canvas, turning them into gigantic emotionally charged artwork installations.  Strange’s works act to question our connection to home and its position as a symbol of stability.

“I’ve always been fascinated with the home.  I think it is something that sits in everyone’s imagination as this powerful symbol that we take with us,” said Strange.

“Ian makes the familiar unfamiliar, he forces his audience to look at life through a new lens. His cinematic eye and shape shifting artistic ability to transpose his unique view of the world across multiple forms of media and artistic expression make him truly our generations most original stand out director,” said Morrison.

Silcox adds, “When I first saw Ian’s exhibition works for Final Act, which was in response to the Christchurch Earthquake, I thought I was looking at the work of one of the best artists of our generation. To be given the chance to work with Ian on this project and understand his creative practice has been an unbelievable honour.”

There are planned screenings and artist talks around Australia including at the Art Gallery of Western Australia with dates to be confirmed.

Strange opens his new exhibition ‘SHADOW’ in Sydney on 2 March to coincide with HOME: The Art of Ian Strange.