Home • About Us • Board & Industry Advisory Group Committee • Dot West 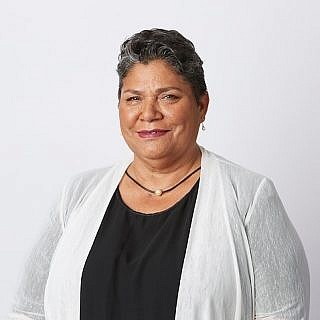 Dot West is a Noongar woman from the south west of Western Australia, but has been living and working in the Kimberley region since 1977. Dot has worked in the media industry for the last 30 years in various capacities.

Dot has served on numerous boards including the Inaugural Vice Chairperson of NITV, Screenwest, Australian International Documentary Conference, the National Indigenous Radio Service along with her current tenure as a non-Executive Director of SBS, Director of Goolarri Media Enterprises and Ramu Productions in Broome and the Chairperson of the Indigenous Remote Communications Association which is transitioning to the peak national body for Indigenous Media.

Dot works freelance as a scriptwriter, accredited trainer and consultant and also serves on WA’s Screen Industry Diversity and Inclusion Leadership Group. Over the years, Dot has been recognized by the industry and her peers for her work as a writer and her role in the Indigenous media sector, and more broadly, the Australian screen industry such as the 2005 Tudawali Award, 2008 WASA for Outstanding Contribution to the WA Screen Industry and in 2014 an Honorary Doctorate with Swinburne University along with an AWGIE in 2009 for her work in The Circuit.